An online ad from Halfords was called “condescending” after saying that a pink bicycle helmet is perfect for young girls because it makes them look pretty.

The heavily gendered blurbs were posted online alongside two images of the Bell Amigo bike helmet in pink and blue.

The information on the blue helmet – designed for “boys up for action” – describes some of the features of the safety equipment, including good air vents and a stylish visor.

Scroll down for video

But the pink helmet has been described as “cute little girls who really like to play on their bikes and look really pretty when they do.”

He continued : ‘[The helmet] protects those cute little heads and can be adjusted to feel perfectly comfortable and cool to wear. ‘

Members of the public took to social media to slam the post, using #HalfordsSexism to express their fury.

Kate Gray, mocking the tone of the ad, wrote on Twitter: “PUT THIS WIDDLE HELMET ON YOUR PRETTY WIDDLE HEADS YOU PRETTY WIDDLE LADIES, OH YES, WHO’S A GOOD GIRL.”

Susie Marwood, who works for a national domestic violence charity, added: “Did you #cycletowork today? Are you a woman Hope you thought how “beautiful” you were (sic).

And Elizabeth McWilliams wrote: “Can’t believe @Halfords could write something so horribly patronizing that feels like another century.”

Members of the public took to social media to slam the post, using #HalfordsSexism to express their fury

Others said they would refuse to shop in the outdoor chain again.

Geoff Earl, from Edinburgh, wrote on Twitter: ‘If this ad is still live by the weekend @HalfordsCycling just lost a £ 270 order from me. #Halfordssexism’

In a post on Halford’s Facebook page, Emily Trenwith added: “I used to buy car parts from you and put them on my own car.

“I won’t do this again – not because I’m female (and you probably think I can’t) but because I’m so disappointed with the blatant sexism of your product descriptions.”

The Let Clothes Be Clothes gender equality campaign group also posted a photo of the ad on Twitter alongside the post: “My daughter bought the Halfords blue, but I can assure you I know a lot of boys. with “pretty little heads”.

“It reminds me of a sketch of Father Ted!” “ 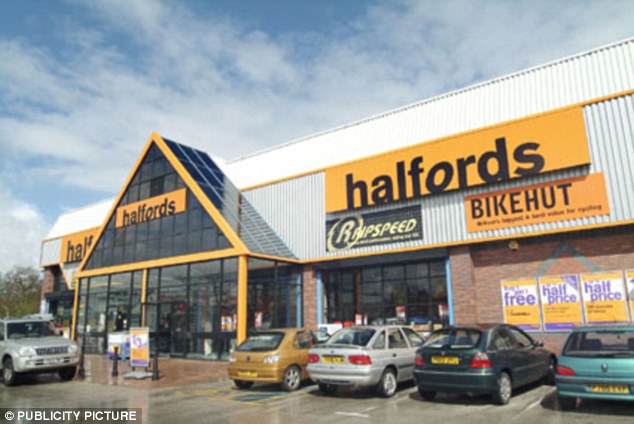 Meanwhile, some users disagreed that the wording of the post was condescending, arguing that it was difficult to get children to wear safety gear.

Neil Lawson wrote on Twitter: “Oh, give them [Halfords] pause. Is that a pink hat? How are they supposed to sell a pink hat?

Another user, known as War and Peace, wrote: “Parents are the intended readers of advertisements, not little children. Lighten!’

Halfords confirmed he was made aware of the issue and said he has since changed the wording.

A company spokesperson said: “We offer a range of helmets with different characters and colors for all age groups and the different needs of large and small riders.

“We listen to our customers and reflect their needs, with the aim of breaking down all the barriers that prevent children from cycling.

“The descriptions of two helmets have been changed on our website to better reflect what our customers want and we apologize for any violations.”

FROM READING “HOW TO BE GORGEOUS” TO GIRLS TO BOYS CHEMISTRY SETS: SEX TAGGED ADVERTISING BY FRUSTRAL PARENTS

This is not the first time that an advertisement or poster for a children’s product has been labeled sexist.

In 2013, Boots admitted it was wrong to use separate signs labeling girls ‘and boys’ toys – placing Science Museum-branded toys in the latter category – after outraged shoppers took to Twitter and Facebook.

Tesco has also been criticized for labeling a children’s chemistry game as a boys’ toy. 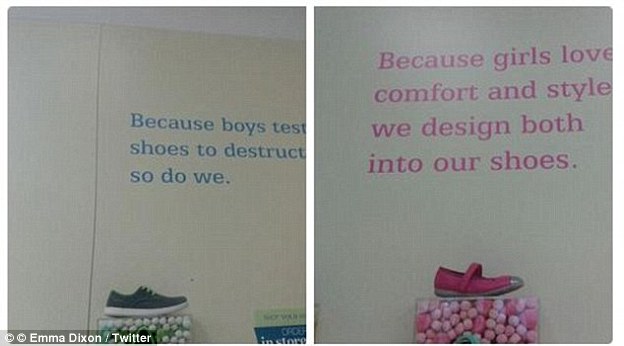 Last year, around 3,000 parents protested a poster by Clarks, which used blue text to describe shoes for boys who climb trees and pink for a pair for girls who “love comfort and style. “.

And Harrods had to apologize for storing books called “How to Look Gorgeous,” which encouraged girls to “look stylish,” and “How to be smart,” helping boys “remember things.”

Last year, around 3,000 parents protested a poster by Clarks, which used blue text to describe the shoes for boys tree climbers and pink for a pair for girls who “love comfort and style.” .

The “Let Shoes Be Shoes” hashtag then gained momentum, with the channel saying it “never intended to offend.”